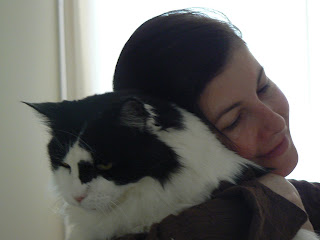 On Thursday, June 28th, just before noon my beloved Oreo left this Earth to rise, I like to think, to a higher plane, to a place where there is only love and peace and comfort and happiness. Of course no one knows what lies beyond, but I hope when I take this step that I will open my eyes to the soft, furry face of my dearest friend.
For the past 15 years, we shared an unconditional bond of love. He was always looking for me, and I for him; it was just what we wanted to do, it came naturally. And over my years of living without a “human,” I never felt alone because Oreo was there, his watchful golden eyes following me to and fro – my brown eyes following him – the perfect give and take. His presence was so large, so confident, so incredibly protective. We were best friends, lifelong companions, mother and son maybe. We were two souls joined in a quiet bond, though we spoke volumes to each other. Most nights he would spend some time laying on my chest, his gaze fixed on me, and we would talk, often it was just me thanking him for choosing me.
They say animals choose their owners, especially cats, and how true a statement. When I moved to in 1993, Oreo was living in , on his own. His family had moved leaving something precious behind (I thank them for this), undoubtedly because something better lay ahead. I remember seeing him the first time in the neighborhood and thinking how beautiful and charming he was. His little swagger, his big personality, combined with a softness and loving nature that was undeniable. He had been living outside for over a year, with some of the neighbors feeding him. But I let them know he was now a formal part of my family and that they could forgo their duties, that he was well cared for now. And care for him I did, happily, gratefully, like a doting mother, for all these cherished years.
There are so many memories I could write about, so many tender memories. I may share some as the sharpness of his passing softens. But I wanted to post this to let anyone know who may want to know that Oreo has taken his step, and that he is at peace. He will be dearly missed by many, and mostly by me, a person who believes she will see him again. This photo was taken of us by my good friend Sherri.

Email ThisBlogThis!Share to TwitterShare to FacebookShare to Pinterest
Labels: Oreo 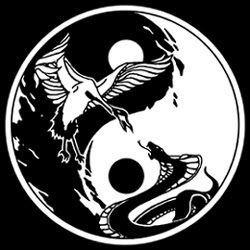 So, is anyone out there finding themselves becoming more methodical? Like, do you get up and feel compelled to go through your motions? These days I get up, make the bed, do any dishes, straighten the living room, and generally get my surroundings in order before I begin working. Even regular tasks, like doing laundry or putting similar things together in the same place, have become more of a habit. OCD or a subconscious preparation for the golden years? Maturity maybe? Just getting organized? Not sure, so I Googled the term Economy of Motion, and this is what I found:

"The founder of Wing Chun is believed to have been a middle aged woman defending herself against more powerful opponents. It was not in her interest to engage in a prolonged conflict. Her opponent's stamina would triumph over hers. It was not in her interest to execute unnecessary moves. Why block then strike if a strike can also block at the same time? The longer a struggle lasts, the more chance there is of exposure to an opponent's lucky hit. Time and limited physical expenditure is of the essence. Wing Chun seeks to incapacitate an opponent as quickly as possible with as few movements as possible. A strike that blocks is better than a block and a strike. A hand that is contacting an opponent is more efficient than withdrawing a hand to strike a second time. In Wing Chun, one movement or positioning serves more than one purpose. There are always multiple options depending on the situation."

How thought-provoking! I like the whole idea of conserving your energy for other things, or rather not expending your energy on useless things. This approach could be applied to life. Vehhh-rrrrry in-ter-esting. And I couldn't find a good pic of that German from Laugh-In. :-)
on June 24, 2007 No comments:

Email ThisBlogThis!Share to TwitterShare to FacebookShare to Pinterest
Labels: Random 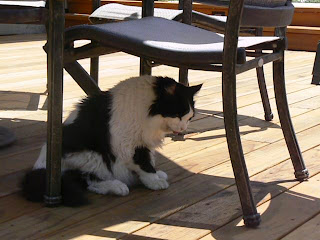 Today is a beautiful day outside. And as my friend and fellow blogger at Foziewisp has done, I too shall escape the confines of work and take the digital camera for a spin 'round the yard. Ah, the joys of working from home (when you're not procrastinating yourself into a tizzy).
I just filmed a short video of my kitty cat whilst he groomed al fresco, after a meal of pureed wild salmon and chicken. From my kitchen to his kitty belly. He is getting only the best of care during these very important and cherished days.
There has also been some incredible growth in the Cleveland sage department. I thought I was cursed because I could never get one to grow. The curse has been indeed lifted and it is flourishing. Yay for sage. 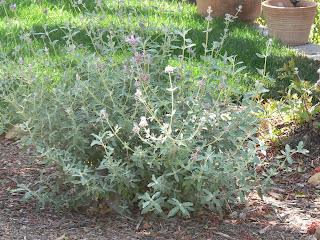 Email ThisBlogThis!Share to TwitterShare to FacebookShare to Pinterest
Labels: Oreo, Outside

Once in a Blue Moon 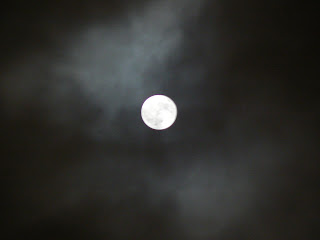 So, what do you do when a deadline is crushing down and every minute counts? You mean you don't stop to update your blog with last night's Blue Moon pictures? Aw, what a lightweight! I simply must get away from my writing for a second and this is just the thing. Now, the tripod I sold for $5 in the garage sale (worth oh-so-much-more) would have come in real handy since I apparently have the jitters, or it's the earth moving, or something. I vaguely remember the gargantuan tracking telescope we used in Mr. Kowalski's Astronomy class at Edison Community College. Something about we're moving, it's not, and you get blurred pictures because of this. One turned out pretty clear but the others are iffy, but still interesting.

The one with the tail is probably something some astronomy geek could explain. Any geeks out there that care to offer some input on the tail? I left the last really blurry one because it shows the tail also. Kinda neat. The last blue moon in California was on July 31, 2004. After tonight's, the next one will be on Dec. 31, 2009. Long time to wait. 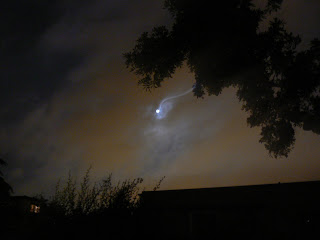 In other Blue Moon news, in Cadiz, KY, at the newly renovated Lake Barkley State Resort Park, they hosted the first Kentucky Blue Moon Celebration - guess it ended this morning. They take their blue moons seriously! 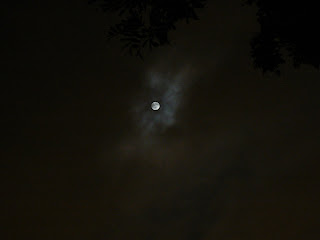 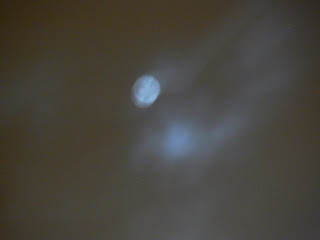